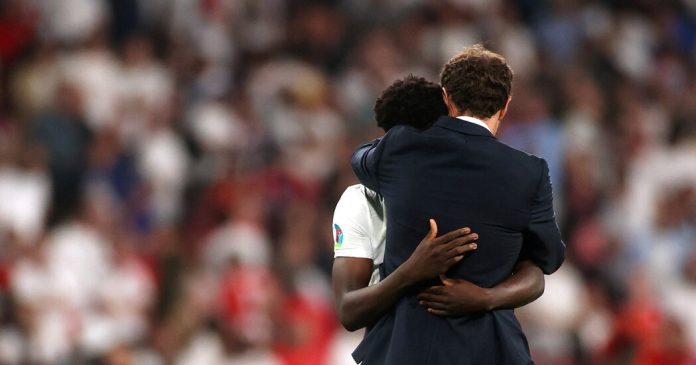 LONDON — England wrapped its arms around its national soccer team the morning after its history-making run ended in a heartbreaking defeat. But an ugly eruption of racist gibes against some of its young Black players was a reminder that not everyone glories in the diverse portrait of the country that this team reflects.

The three players, who are Black, are among the youngest members of a young team that had captured the national imagination over the last four weeks as it swept into the final game of the European soccer championship, England’s first crack at victory in a major tournament in 55 years.

The racist attacks — the likes of which have long plagued European soccer, prompting England’s top league to participate in a weekend social media blackout earlier this year — drew immediate condemnation from leaders including Prime Minister Boris Johnson and Prince William, Queen Elizabeth’s grandson. He is president of England’s Football Association.

“This England team deserves to be lauded as heroes, not racially abused on social media,” Mr. Johnson declared on Twitter. “Those responsible for this appalling abuse should be ashamed of themselves.”

Others called on Twitter and Instagram to crack down on their platforms to traffic in racist language and tropes. Some pointed out that the England players had made campaigning for a more just and equitable society a central part of their message, kneeling before games to protest racial injustice.

“This is why we take the knee,” David Lammy, a Labour Party member of Parliament who is Black, said on Twitter. “Praying for a better future — worthy of the values, beauty, and respect exemplified by every single England player.”

In another era, this kind of loss — so numbingly familiar to England’s long-suffering fans — might have stoked a round of recrimination beyond the recesses of social media. But the British newspapers were united in their support, focusing on the team’s inspiring run as much as its spirit-crushing defeat.

“It hurts … but we’re so proud of you,” said The Daily Express. “Pride of Lions,” said The Sun, playing off the nickname derived from the team’s emblem, the Three Lions. “It all ends in tears,” said The Daily Mail, which, like its rivals, ran a full-page photo of the manager, Gareth Southgate, consoling a distraught Mr. Saka after Italy’s goalkeeper saved his kick.

Mr. Southgate shouldered the responsibility for the loss, saying he made the substitutions that sent two young players on to the field only minutes before the end of extra time to face the immense pressure of a penalty shootout. We decided to make the changes near the end of the game, and we win and lose together as a team,” he said to the broadcaster ITV. “That was the order that we came to. But that’s my call.