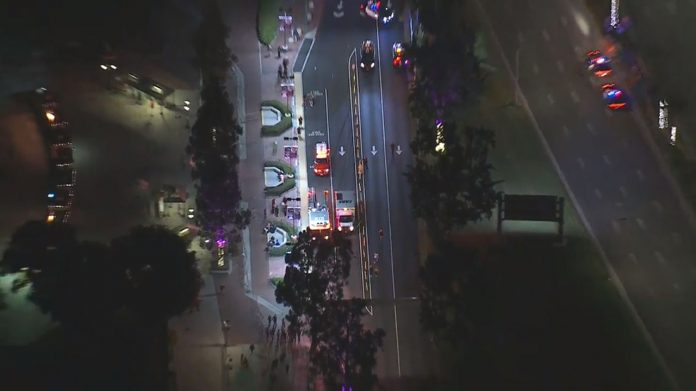 According to reports, a drive-by shooting near Knott’s Berry Farm in Southern California left at least one minor wounded Friday evening.  Video on social media showed crowds running inside the theme park, but Buena Park Police dismissed false reports that an active shooter may have been inside. “Officers are currently responding to a shooting outside of Knott’s Berry Farm. There is no active shooter,” the department tweeted around 9:30 p.m. PT soon after the shooting was reported.  The wounded youth’s condition was not disclosed, KCAL-TV of Los Angeles reported.

A park patron shared a video with FOX 11 in Los Angeles showing people hiding inside a park restaurant during the initial reaction to the incident.

An aerial view outside the entrance to Knott’s Berry Farm following the shooting.
(SkyFOX) “Luckily ended up at a restaurant. When a shooting went down. All safe,” @SkateCholo wrote.

Knott’s Berry Farm put out a statement saying: “We have been made aware of an incident which took place away from Knott’s Berry Farm. A victim was assisted by park personnel outside of the park’s gates and transported to a local hospital. The incident is currently being investigated. All inquiries should be directed to the Buena Park Police or local authorities.”

Police have not confirmed any arrests, but the streets surrounding the park were closed as officers searched.

Knott’s Berry Farm started as a roadside berry stand in the 1920s and has since grown into a theme park that includes rides, stage shows, and other entertainment. Its Buena Park location is about 20 miles southeast of downtown Los Angeles.