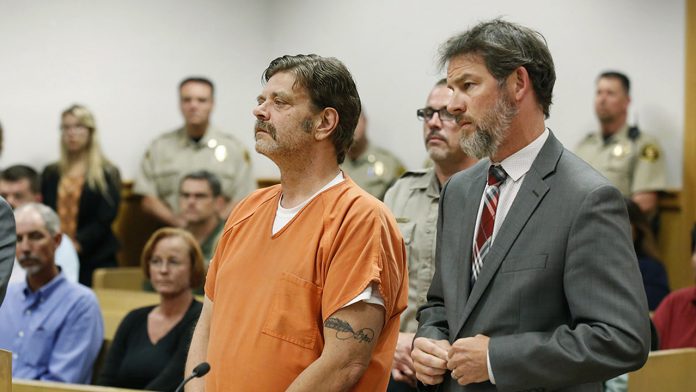 A Colorado man was found guilty Friday of second-degree murder and child abuse in the death of his 13-year-old son.

Mark Redwine, 59, was arrested in 2017, four years after the remains of Dylan Redwine, 13, were found in a wooded area several miles from his father’s house outside Durango, Colorado. The teen’s skull was found by hikers in 2015, FOX 31 in Denver reported.

Dylan had been at his father’s house on a court-approved Thanksgiving visit.

The boy went missing Nov. 19, 2012, and Redwine told investigators he had left him at the house to run errands and returned to find him gone. Redwine didn’t testify at the trial.

Prosecutors argued that Redwine attacked his son after the boy found fetish photos of Redwine wearing women’s lingerie and eating feces from a diaper.

‘BOY NEXT DOOR KILLER’ GETS DEATH FOR MURDERS OF 2 WOMEN

The defense claimed the photos had nothing to do with Dylan’s death and suggested the boy ran away and was possibly killed by a bear or mountain lion.

A forensic anthropologist, Diane France, testified that Dylan suffered a fracture above his left eye. France said that two marks on the boy’s skull were likely caused by a knife or sharp tool at or near the time of death.

Fred Johnson, exceptional deputy district attorney, told jurors that investigators found traces of Dylan’s blood in Redwine’s living room and that a cadaver-sniffing dog alerted them to the smell of human remains in the back of Redwine’s truck and on his clothing.

Moran claimed it was an “infinitely small” amount of blood that could be found in any home and called the use of a dog “junk science.”

A missing poster of 13-year-old Dylan Redwine hangs on a trailhead sign next to Vallecito Reservoir in Vallecito, Colorado, Nov. 26, 2012.

Dylan’s brother testified he didn’t want to go on the visit, and his mother, Elaine Hall, said she didn’t like to send him to see his father, FOX 31 reported.

His brother also testified that Dylan found the photos before his disappearance.

Hall almost immediately suspected her ex-husband wasn’t telling the whole truth about their son’s disappearance, text messages introduced as evidence suggested. Two hours after learning Dylan was missing, Hall texted Mark Redwine: “He wouldn’t just leave. He would have called me. I am so suspicious of you right now. How could he just disappear?”

Hall and Redwine appeared on an episode of “Dr. Phil” together in 2013, leveling accusations at each other, and the defense later claimed that the appearance turned public opinion against him. Moran claimed it also influenced the investigation, which he called “biased” and “sloppy.”