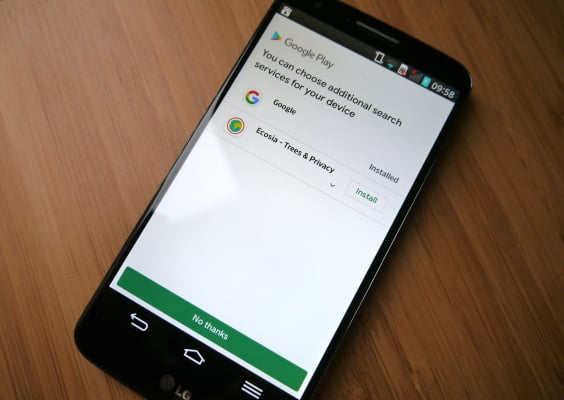 Google is ditching a massively unpopular auction format that underpins a choice screen it offers in the European Union, it said today. Eligible search providers will be able to freely participate. The auction model was Google’s “remedy” of choice — following the 2018 EU $5 billion antitrust enforcement against Android — but rivals have always maintained it’s anything but fair, as we’ve reported previously (here, here). The Android choice screen presents users in the region with a selection of search engines as a default at the point of device set up (or factory reset). The offered choices depend on sealed bids made by search engine companies bidding to pay Google to win one of three available slots.

Google’s own search engine is a staple “choice” on the screen regardless of the EU market.

The pay-to-play model Google devised is not only loudly hated by smaller search engine players (including those with alternative business models, such as the Ecosia tree-planting search engine), but it has been entirely ineffectual at restoring competitive balance in search market share, so it’s not surprising Google has been forced to ditch it.

The Commission had signaled a change might be coming, with Bloomberg reporting in May remarks by the EU’s competition chief, Margrethe Vesager, that it was “actively working on making” Google’s Android choice screen for search and browser rivals work. So it evidently heard the repeated cries of “foul” and “it’s not working, yo!”. And — finally — it acted.

However, framing its own narrative, Google writes that it’s been in “constructive discussions” with EU lawmakers for years about “how to promote even more choice on Android devices while ensuring that we can continue to invest in, and provide, the Android platform for free for the long term”, as it puts it.

It also seems to be trying to throw some shade/blame back at the EU — writing that it only introduced what it calls a “promotional opportunity” (lol) “in consultation with the Commission”. (Ergo, “don’t blame us gov, blame them!”)

In another detail-light paragraph of its blog, Google says it’s now making “some final changes” — including making participation accessible for “eligible search providers” — after what it describes as “further feedback from the Commission”.

“We will also be increasing the number of search providers shown on the screen. These changes will come into effect from September this year on Android devices,” it adds.

The planned changes raise new questions — such as what criteria will be used to determine eligibility. They will Google’s standards be transparent or, like the problematic auction, sealed from view? And how many search engines will be presented to users? More than the current four, that’s clear.

Where Google’s own search engine will appear in the list will also be very interesting to see and the criteria for ranking all the options (market share? random allocation?).

Google’s blog is mealy-mouthed on any/all such detail — but the Commission gave us a pretty good glimpse when we asked (see their comment below).

It remains to be seen whether any other devilish dark pattern design details will appear when we see the full implementation.