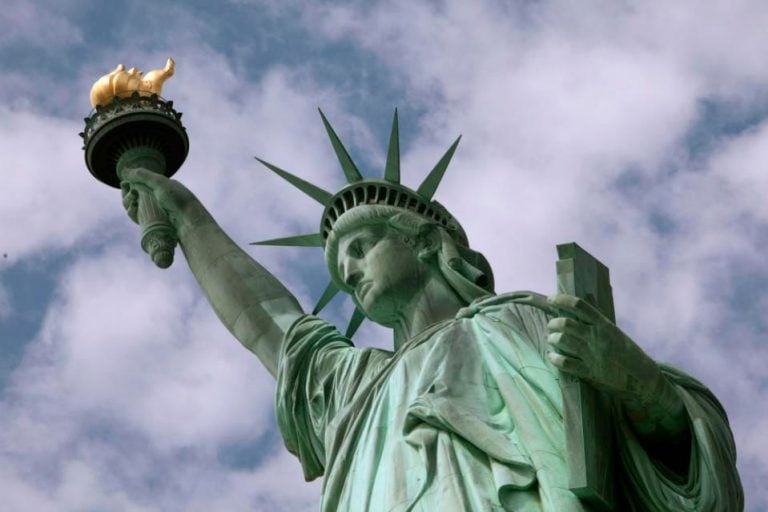 The Statue of Liberty has been known for more than a century as one of the most preeminent symbols of American freedom – but now a Washington Post writer appears to be making the statue another target of cancel culture.

Philip Kennicott, an art and architecture critic who won a Pulitzer Prize in 2013, argues in an essay published Saturday that Lady Liberty stands for “hypocrisy and unfilled promises.”

Kennicott’s piece, titled, “Maybe it’s time to admit that the Statue of Liberty has never quite measured up,” was accompanied by an illustration of the famous statue resting on someone’s fingertip – as if the figure were only a fraction of an inch tall instead of 151 feet (305 feet including the base).

In arguing that the statue in New York Harbor has grown irrelevant, Kennicott uses evidence that he spotted no representations of the figure when he visited a Chicano art exhibit at the Smithsonian American Art Museum in Washington.

He concludes from that one example that although the statue is as “familiar to some Americans as the flag, the statue is just as meaningless or foreign to others, a sign without significance, or worse, a symbol of hypocrisy or unfulfilled promises.”

Later, he argues that the statue is meant mainly for descendants of European immigrants and less for Americans whose families originate from other parts of the globe.

The Statue of Liberty was seen in New York Harbor, June 2, 2009. (Associated Press)

“I was looking at a Black newspaper from 1915,” Kennicott quotes Lonnie G. Bunch III, secretary of the Smithsonian and founding director of the National Museum of African American History and Culture, as saying in a recent telephone interview.

“It said that while everybody was excited by the statue, it has turned its back on America,” Bunch added, according to Kennicott.

The statue attracted more than 4 million visitors each year in 2014, 2015, and 2016, the most recent years for which figures are available on the National Park Service website. There is no breakdown of where the visitors were from.