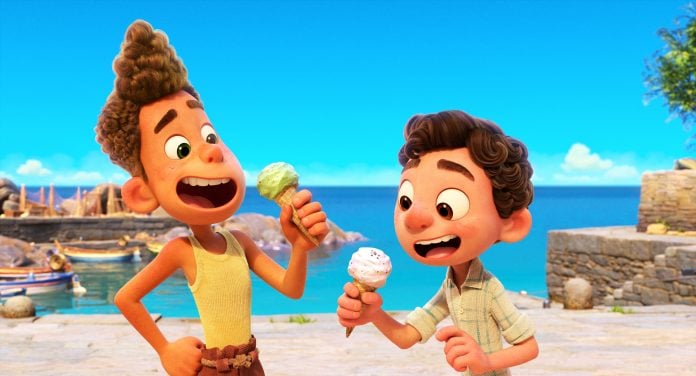 The following contains spoilers for the first act of ‘Luca.’

For its first decade of making feature films, there was a saying that Pixar chose its projects around things they wanted to try animating. A Bug’s Life featured plants, Monsters Inc. had a lot of furs, Finding Nemo was set underwater. Even later productions were about refining techniques and textures, like the hair and clothes in Brave. After 16 years, Pixar doesn’t really have anything left to prove, which means the studio can finally settle into a house style.

Coming out this week on Disney+, Luca is the story of a young sea monster who becomes curious about the surface world. If you think that sounds like The Little Mermaid, well, yeah, it is very much Pixar’s take on that fable. Luca stumbles upon some human artifacts and ends up venturing above the surface. As a result, discovers that when he leaves his watery environment, he turns into a human. That is where the similarities to the Disney film ended, as Luca meets another sea dweller with a love of the air-breathing world, and the two of them travel to a nearby town in search of a Vespa scooter. It’s pretty blatant product placement and charming, given how prominent the brand is in our ideas of Italian culture, especially mid-20th-century films like Roman Holiday. If this movie is romantic at all, it’s about what the iconic brand represents: freedom.

The movie is also reminiscent of Hideo Miyazaki’s Ponyo, which is fine because Luca feels like it. It’s an American-made Ghibli film, one where the object is acceptance, platonic love, and a deep appreciation for the simple pleasures like a heaping plate of pasta. Luca has many (it’s part of the central plot,) and it’s absolutely mouthwatering. Luca is a showcase for every skill Pixar has mastered over its four decades of existence. There’s a natural food, hair, fabric, and plenty of water, both in ocean and rain form.

The one thing that still maintains a cartoonish quality is the people. That’s more of an aesthetic choice at this point, rather than a sign of limited character models, the likes of which populated the company’s earlier feature films like Toy Story and Monsters Inc. The characters are all soft with rounded edges, painted in colors that are more dreamy and muted than bright. Pixar has been developing a prototypical character model since Ratatouille, one that’s been iterated on in the past decade in films like last year’s Onward and Soul. But those were fantasy movies with bright, outlandish settings — even Soul splits its time between New York and the afterlife. Humans get a lot more screen time in Luca, even if it is a fantasy film.

Luca is a showcase for every skill Pixar has mastered over its four decades of existence.

Though the protagonists are sea monsters, the underwater scenes are actually pretty mundane: Luca’s family lives in a cave, and the kid spends his days watching over a school of sheep-like fish. It’s grounded in a way that most Pixar films are not; its closest relative in the Pixar stable is Ratatouille, and not just because both are set in a caricatured European country.

Pixar has always had a gift for story, and the one in Luca is quite moving. Still, now that the studio has refined its craft, the graphics can be on par with the narrative, visualizing those emotions with depths of color and texture that movies like Toy Story could only dream about. Pixar’s house style is no longer limited by technology, allowing the films to finally look how they feel.