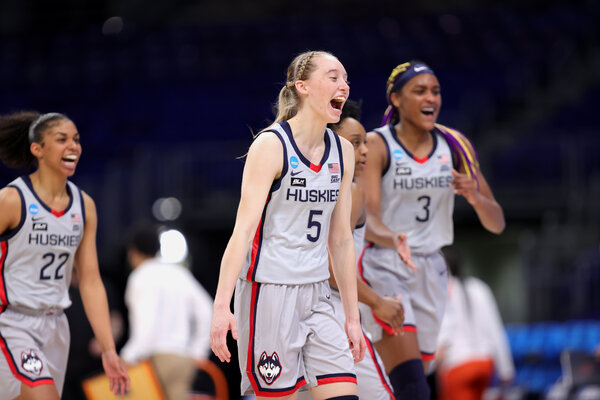 Earlier Tuesday, Caitlin Clark and Iowa did their part. Paige Bueckers and top-seeded UConn came through in the nightcap with an 83-47 win over No. 8 seed Syracuse in a contest that was never in doubt. Bueckers, a freshman, led the Huskies in scoring with 20 points as they played their second game without their Hall of Fame coach, Geno Auriemma, who was still away from the team after testing positive for the coronavirus.

(His birthday was also Tuesday; he turned 67.) UConn also did it without freshman point guard Nika Muhl, who injured her ankle in the first-round win. The offense, paced by Bueckers, didn’t seem to miss a beat. Bueckers, the Big East player of the year, also rattled off four assists, five rebounds, and three steals, at times celebrating her passing like she

Would a shot from outside. Bueckers only took one shot in the second half after the Huskies had established a comfortable lead. Paige has incredible court vision, so she’s able to get those passes there first,” said UConn junior forward Olivia Nelson-Ododa. “It was timely, and just when it’s wide open, so I give her a lot of credit, especially finding the genuine person.

Syracuse shot a season-low 28 percent and made only three of its 15 3-point attempts. The 47 points were also a low for the season. Our communication was so good and the movement, we just made it really difficult for Syracuse to get good shots and perfect looks,” said Chris Dailey, a UConn assistant coach. UConn’s win set up a matchup with Clark and the Hawkeyes, a much-anticipated contest since

The bracket was revealed eight days ago. Clark, a freshman who leads the nation in scoring, posted 35 points on Tuesday against Kentucky, the most a player has had in this tournament so far. Bueckers has garnered more attention nationally as an elite freshman guiding a young UConn program. But Clark has carried Hawkeyes to their second consecutive Sweet 16 and clearly gives this round of 16 showdown star power on both sides.