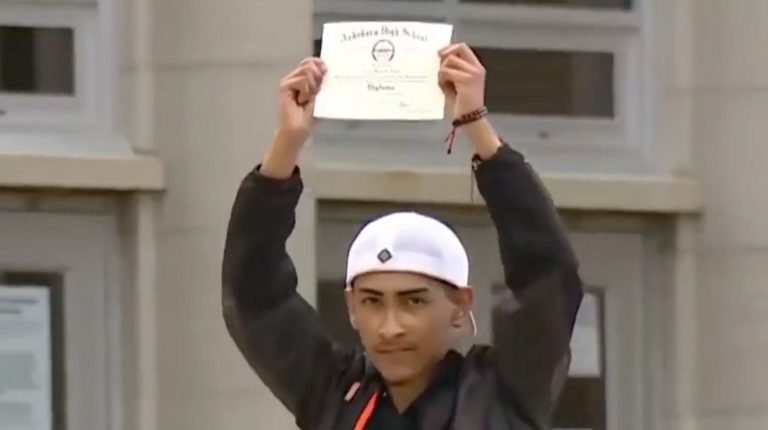 ASHEBORO, N.C. (AP) — A North Carolina high school graduate now has his diploma after a social media uproar over the Mexican flag he wore over his gown.

Ever Lopez, 18, walked out of Asheboro High School on Monday with the diploma in his hands and showed it to a small gathering of people, news outlets reported.

A 68-second video of Thursday’s graduation ceremony shows Lopez crossing the stage in line with the red, white, and green Mexican flag draped over his blue graduation gown. He was handed a diploma holder before walking up to school principal Penny Crooks. Lopez then seems to try to remove the flag before walking off without his diploma.

Asheboro City Schools said in a statement on Friday that Lopez violated part of the graduation dress code prohibiting the wearing of flags, but that couldn’t contain the controversy online. Crooks faced death threats, and someone threatened to shoot up the school if he didn’t get the diploma. The Lopez family sought a meeting to smooth things out.

Supporters of Lopez gathered at the school on Monday while unmarked Asheboro police cars were parked nearby in response to the threats. WFMY reported police also stepped up patrols around the high school and in the principal’s neighborhood. The family held a news conference and then went inside to speak with school administrators before Lopez emerged with his diploma.

Lopez said that while he appreciated the support, the threats against the principal should end.

“If you were going to send her an email or say something, at least leave threatful things out,” Lopez said. “I just feel like they should respect her even though she did something wrong, you know?”

Lopez said he wore the flag out of pride for his Mexican roots. He said he was the first member of his immediate family to graduate from high school.