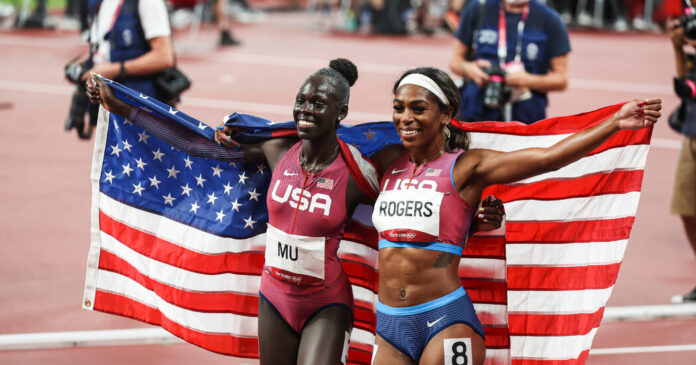 Here’s what you need to know:

T.O.K.Y.O. — Before Athing Mu introduced herself to the world at the Tokyo Games, the public-address announcer at Olympic Stadium butchered her name.

Before her opening round heat of the women’s 800 meters, it was Friday, and Mu did not hide her dismay.

“I’m sure everyone saw my face,” said Mu, a 19-year-old American whose name is pronounced “Ah-THING Moe.”

“I don’t even know what he said, but it was terrible. Like, where do you even get that from?”

Mu said all this with a charming, disarming smile — she was used to people getting her name wrong, she said, but it also seemed clear that she wanted some respect. So she went out and made sure to earn it as an Olympic gold medalist.

On Tuesday, Mu became the first American to win gold in her event since 1968, the latest and most significant milestone for one of the sport’s rising stars.

Mu, from Trenton, N.J., finished in 1 minute 55.21 seconds, her personal best and an American record. Her strategy from the start was clear: go to the front and stay there. Her commanding pace turned the race into a coronation.

Mu arrived in Tokyo a few weeks after completing a historic freshman year at Texas A&M, where she broke a host of collegiate records and won the N.C.A.A. title in the 400. At the end of June, she announced she was going pro and signed with Nike.

She proceeded to dominate the 800 meters at the U.S. trials, winning a spot in Tokyo by running the fastest time in the world this year. The shortest time that is, until today.

And while Mu acknowledged that becoming an Olympic gold medalist was “insane,” she knew it was not some far-flung dream. She expected it to happen.

“I knew this was where I was supposed to be at this point in time,” she said. “As long as my mind was right, I was going to accomplish my goals.”

Elaine Thompson-Herah of Jamaica is an Olympic champion — again.

Three days after winning the women’s 100 meters, Thompson-Herah broke clear of the field in the 200 on Tuesday night to win in 21.53 seconds, a national record.

Christine Mboma of Namibia was second, and Gabby Thomas of the United States was third.

Shelly-Ann Fraser-Pryce, who won the silver in the 100, finished in fourth place.

Three Americans advanced through the semifinals of the men’s 200 meters earlier in the evening — but not without some drama.