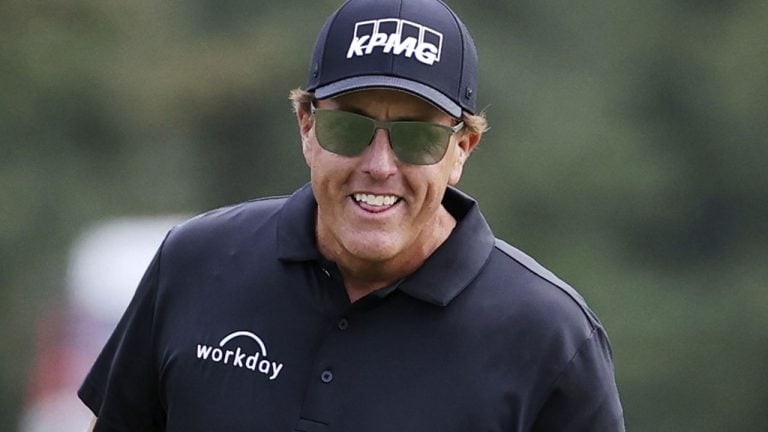 This week, a story published by the Detroit News had golfer Phil Mickelson threatening Thursday to never return to the Detroit area. Then on Friday, Mickelson – who’s in Michigan to compete in this weekend’s Rocket Mortgage Classic – reversed course, sort of.

The 51-year-old California native, whose PGA Championship win in May made him the oldest golfer to ever capture a major tournament title, said he would return to the Detroit area on two conditions: that a petition circulated by Michigan golfer Mike Sullivan, calling for Mickelson’s return, reach 50,000 signatures, and that everyone who signs performs “one random act of kindness,” he said, according to ESPN.

Mickelson had reacted Thursday after The Detroit News ran a story about 2007 federal court records it obtained, detailing how years earlier a bookie from Grosse Pointe, Michigan, allegedly cheated Mickelson out of $500,000, FOX 2 of Detroit reported. Mickelson never faced any criminal charges in connection with the case, the report said.

Detroit News reporter Robert Snell, who wrote the story, identified the bookie as “Dandy” Don DeSerrano, referring to him as “one of the biggest gamblers in Detroit,” who has allegedly “handled bets for big shots as a Las Vegas casino host.”

Mickelson’s lawyer said the News report was accurate but questioned its timing, which coincided with Mickelson’s appearance in the area, ESPN reported.

Speaking to reporters Thursday, Mickelson said he didn’t appreciate the newspaper’s “unnecessary attack” with a story from “two decades ago” and noted that it made him feel unappreciated after juggling his schedule to participate in this week’s tournament in Michigan, FOX 2 reported.

Not like I care; it happened 20-something years ago; it’s just the lack of appreciation,” Mickelson said, according to the station. “Yeah, I don’t see that happening. I don’t see me coming back. I don’t love the people here; they have been great, but not with that type of thing happening. But when Mickelson stepped up to the first tee for Friday’s action at the Rocket Mortgage Classic, played at the Detroit Golf Club, he was met with chants of “We love Phil!” The Detroit News reported.