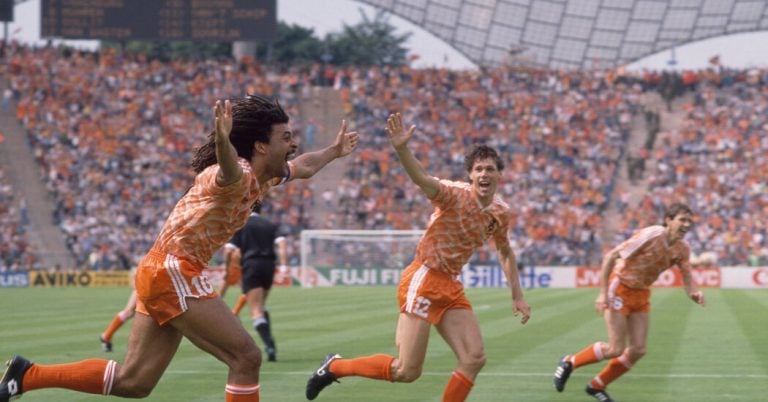 The 16th European Championship, UEFA Euro 2020, is finally about to start, delayed until this year because of the pandemic.

The soccer tournament, held every four years, began as a four-team event in 1960, won by the Soviet Union, and hosted by one or two countries. But it has since grown. From Friday to July 11, this year’s event will be a 24-team Pan-European extravaganza, with 11 host nations staging matches.

Six groups of four teams will play a round-robin format, with group winners, runners-up, and the four third-place teams with the best records advancing to the single-elimination rounds. Baku, Azerbaijan; Munich; St. Petersburg, Russia; and Rome will host the quarterfinals; the semifinals and the championship game are set for Wembley Stadium in London.

And fans will be in the stands. Except for Budapest’s Puskas Arena, which will allow full houses, stadiums will fill only 25 to 50 percent of their capacity.

Dreamed up by Henri Delaunay, the first head of European soccer’s governing body, UEFA, the European Championship is second in popularity and prestige to only the World Cup.

The last UEFA championship, held in 2016, was won by Portugal, even though its star, Cristiano Ronaldo, left the game early with an injury. Here are a handful of the tournament’s most memorable moments.

The Netherlands, the “nearly team” of world soccer, won its first and only title with a 2-0 victory over the Soviet Union in Munich. In the 32nd minute of the final match, the Dutch captain Ruud Gullit took advantage of a poorly cleared corner to head in the return ball. Later, at the other end, goalkeeper Hans van Breukelen gave away and then saved a penalty from Igor Belanov. Both plays were vital but ultimately were overshadowed by Gullit’s goal.

In the 54th minute, midfielder Arnold Muhren lofted a high cross from the left, a few yards outside the Soviet penalty area. Marco van Basten, level with Muhren when the pass was made, strode down the far right side of the site, met the ball in midair, and swung in a wicked volley from an acute angle that flew over Rinat Dasayev (one of the game’s better keepers) into the far corner for the second goal.

The game was effectively over at the point, but the stadium didn’t stop buzzing because a goal like that is rare, especially in a final. It was masterful technique, timing, and skill, from the weight and arc of Muhren’s pass to van Basten’s run and audacious finish. The ball didn’t hit the ground from the moment it left Muhren’s foot until it was pulled out of the net. Rinus Michels, the Dutch coach, covered his eyes in disbelief.

Sweden hosted Euro ’92 with the slogan “Small Is Beautiful.” The tournament also had a fairy tale ending. After Yugoslavia was expelled from the competition in the spring because of an escalating civil war, Denmark was late. The squad wasn’t quite scooped off the beach but not too far off.

The Danes weren’t a ragtag gang, though. In his first year with Manchester United, they had a smattering of journeymen from the Bundesliga and goalkeeper Peter Schmeichel. Denmark’s campaign sparked to life with a late 2-1 win over France that put it in the semifinals against the defending champion, the Netherlands. The Danes won, 5-4, on penalties.

Having dispensed with the European champion, Denmark faced the reigning world champion, a reunified Germany (now with added East Germans). Predictably, Germany dominated early, but unpredictably John Jensen gave the Danes the lead. Jensen, for whom self-belief and ambition trumped technique, usually had his shots clear the goal and the running track and several rows of seats. Not this time. He hit the roof of the German net with a mighty wallop.

Denmark defended capably, and Schmeichel rescued the team when it didn’t. After Kim Vilfort added an insurance goal, the Danish fans sang, “Deutschland, Deutschland, Alles ist vorbei” (“Germany, Germany, it’s all over”). Small might have been beautiful, but Euro ’92 was the last eight-team tournament. Four years later, in England, the field doubled. And Jensen? He headed to England too and continued to shoot wildly from a distance, finding the net only once in 138 league appearances for Arsenal.