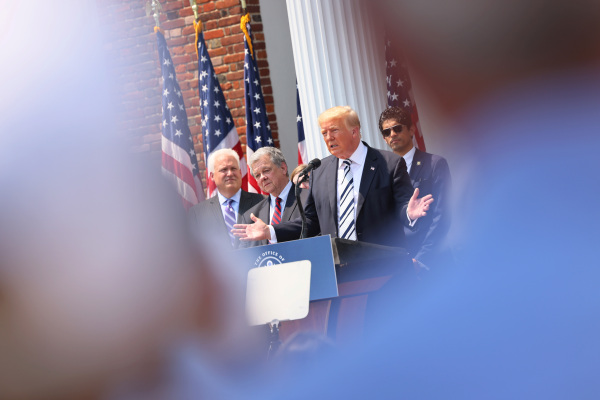 Trump’s spicy trio of lawsuits against the social media platforms that he believes wrongfully banned him have succeeded in showering the former president with a flurry of media attention, but that’s likely where the story ends. Like Trump’s quixotic and ultimately empty quest to gut Section 230 of the Communications Decency Act during his presidency, the new lawsuits are all sound and fury with little legal substance to back them up.

The suits allege that Twitter, Facebook, and YouTube violated Trump’s First Amendment rights by booting him from their platforms. Still, the First Amendment is intended to protect citizens from censorship by the government — not private industry. The irony that Trump himself was the uppermost figure in the federal government at the time probably won’t be lost on whoever’s lap this case lands in.

In the lawsuits, which also name Twitter and Facebook chief executives Jack Dorsey and Mark Zuckerberg as well as Google CEO Sundar Pichai (Susan Wojcicki escapes notice once again!), Trump accuses the three companies of engaging in “impermissible censorship resulting from threatened legislative action, a misguided reliance upon Section 230 of the Communications Decency Act, and willful participation in joint activity with federal actors.”

The suit claims that the tech companies colluded with “Democrat lawmakers,” the CDC, and Dr. Anthony Fauci, who served in Trump’s own government at the time.

The crux of the argument is that communication between the tech companies, members of Congress, and the federal government somehow transforms Facebook, Twitter, and YouTube into “state actors” — a leap of epic proportions:

Defendant Twitter’s status thus rises beyond that of a private company to that of a state actor, and as such, Defendant is constrained by the First Amendment right to free speech in the censorship decisions it makes.

Trump’s own Supreme Court appointee Brett Kavanaugh issued the court’s opinion on a relevant case two years ago. It examined whether a nonprofit running public access television channels in New York qualified as a “state actor” that would be subject to First Amendment constraints. The court ruled that running the public access channels didn’t transform the nonprofit into a government entity and that it retained a private entity’s rights to make editorial decisions.

” … A private entity … who opens its property for a speech by others is not transformed by that fact alone into a state actor,” Justice Kavanaugh wrote in the decision.

It’s not likely that a court would decide that talking to the government or being threatened by the government somehow transform Twitter, YouTube, and Facebook into state actors either.